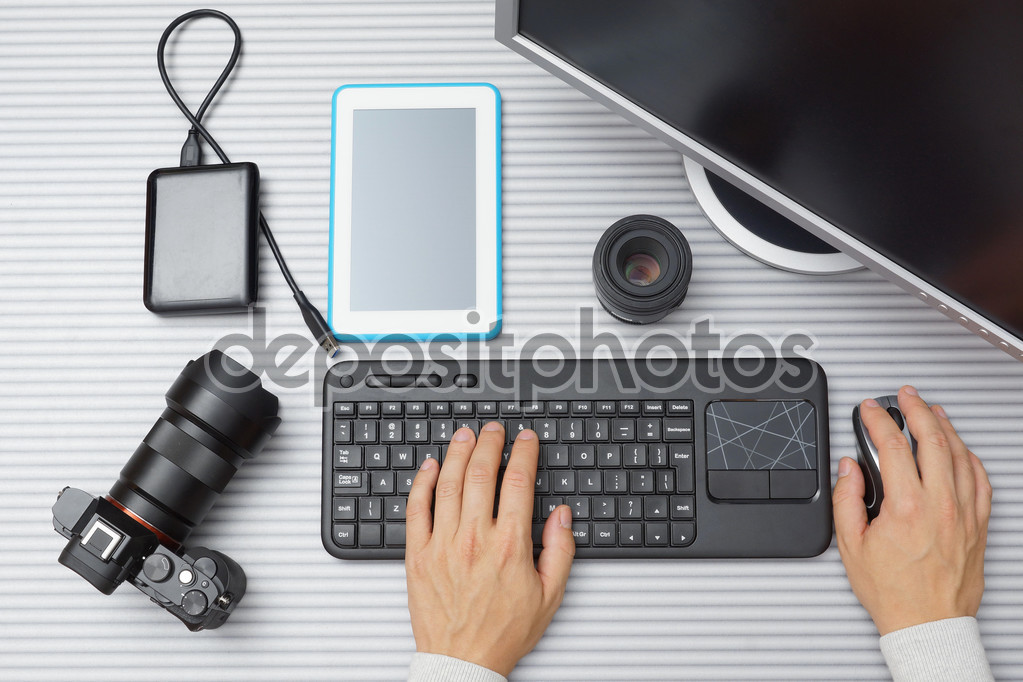 After importing and organizing files in Adobe Lightroom, let’s move from the “library” module to the “develop” module, to start making the first part of the editing of the raw file.

We will face the following screen, with the “raw” file unedited, except from those basic adjustments made automatically during the import process. 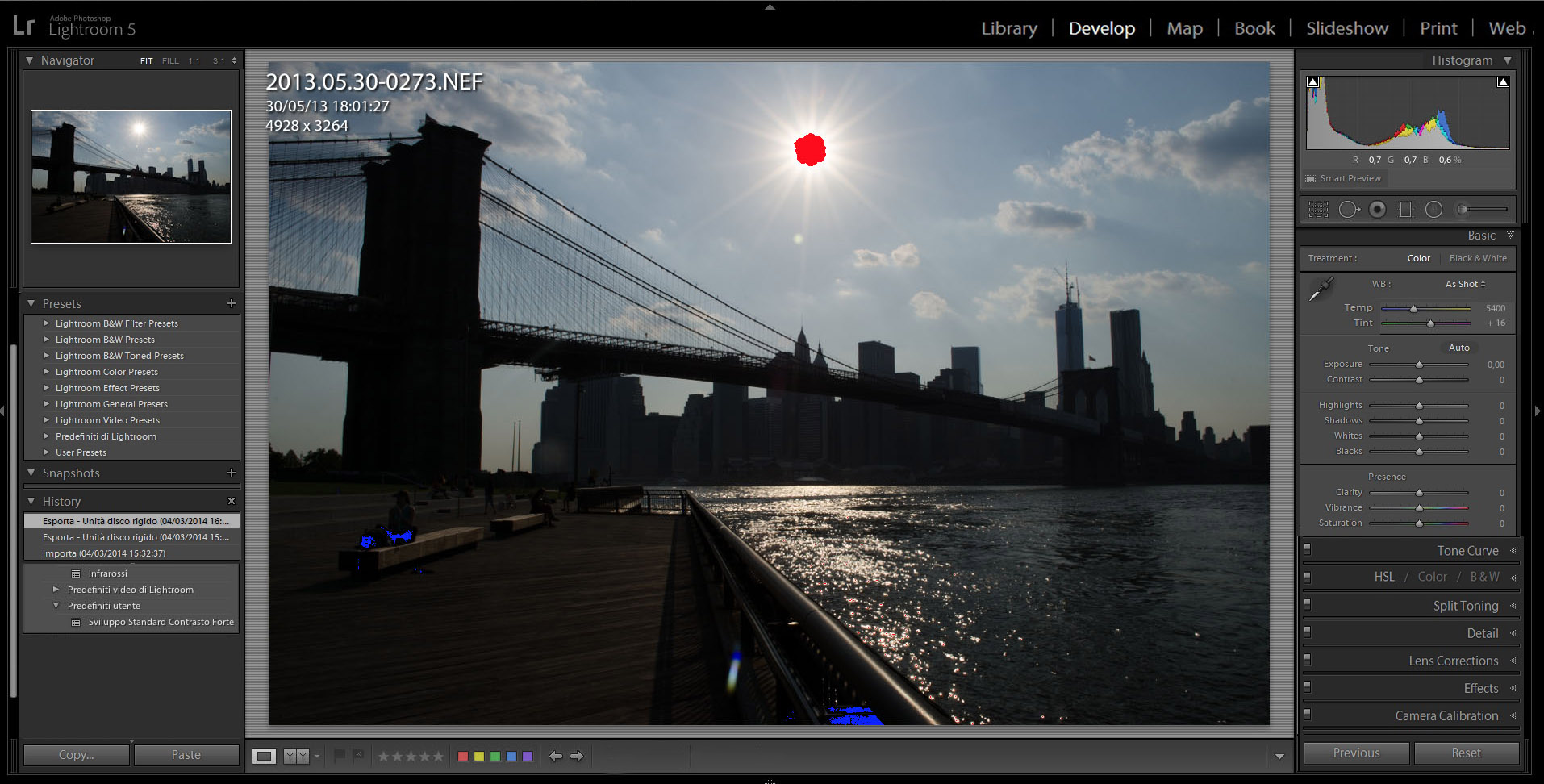 The first thing to do is the correction of the white balance, if necessary. The correction can be made through the use of three tools, also in combination among them:

After the correction of the white balance, let’s take care of the exposure: if the top two buttons on either side of the histogram are active, the image will display the clipping areas (ie burned areas) both those overexposed (in red) and those underexposed (blue). If these areas are crucial for the image, it will be possible to retrieve detail in a number of ways: by acting on the histogram itself, clicking and dragging the mouse in one of the different areas of the histogram (ie exposure, highlights, shadows, whites and blacks) or by acting on the respective sliders of the same panel, where you also have a “contrast” slider. This way you can act either on the overall picture, either selectively on individual areas that represent the shadows and highlights. You can also rebalance situations rather compromised by backlighting, as in the image in example.

In the “basic” panel of settings it is also possible to change the overall impact (presence) by acting on the 3 sliders of midtones (clarity), vibrance and saturation.These adjustments are quite subjective and dependent on personal tastes of everyone of us.

Once completed the adjustments of the basic panel, we will have the situation depicted in in the image below. Now the picture is certainly more balanced, but there are still several adjustments to make. 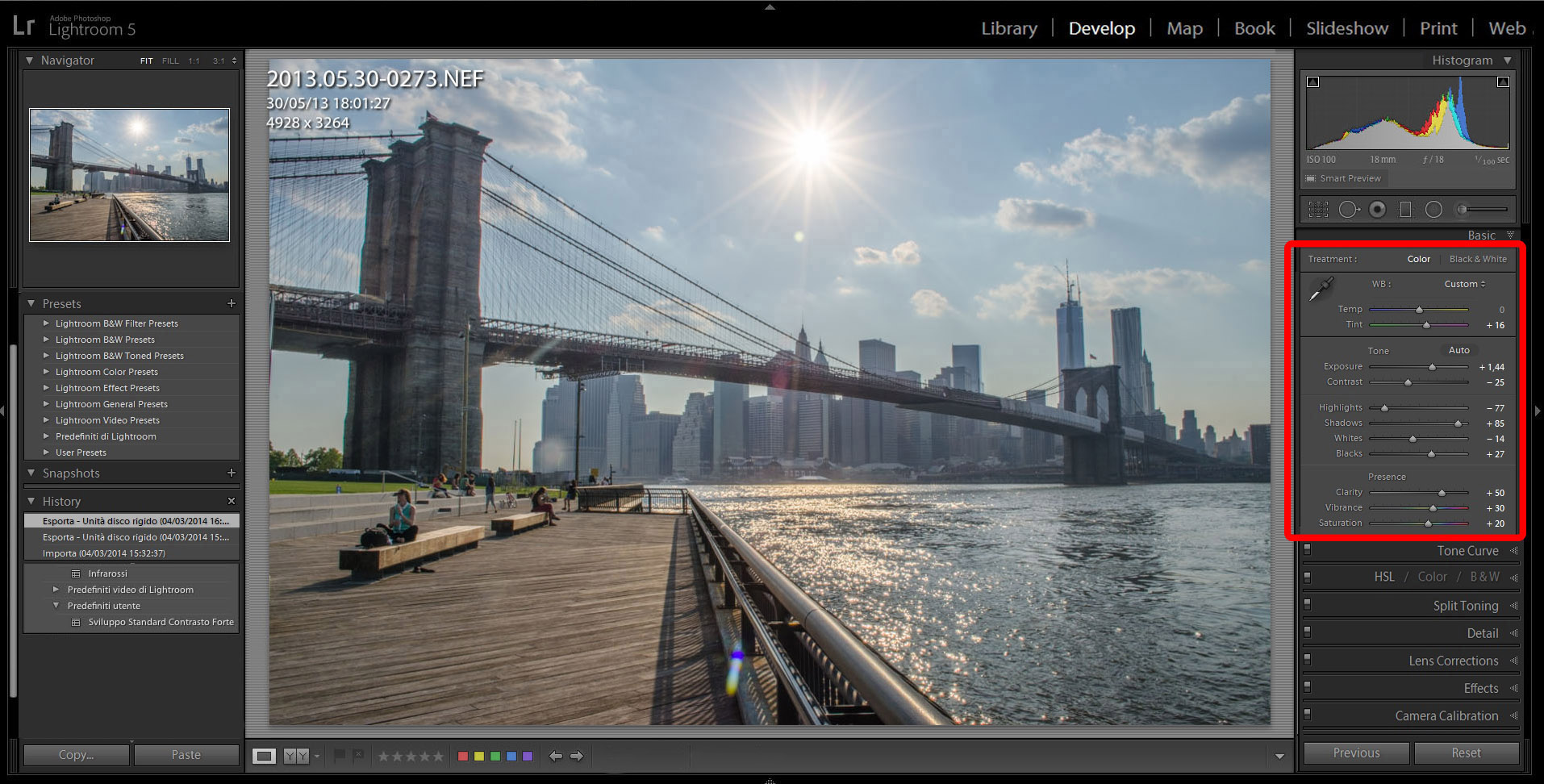 Let’s move then to the “tone curve” panel in order to work on the contrast. Also in this case it’s mostly about subjective choices. In this case I chose a strong contrast from the “point curve” available presets, but it is also possible to work directly on the curve (by clicking and dragging) for more precise adjustments. 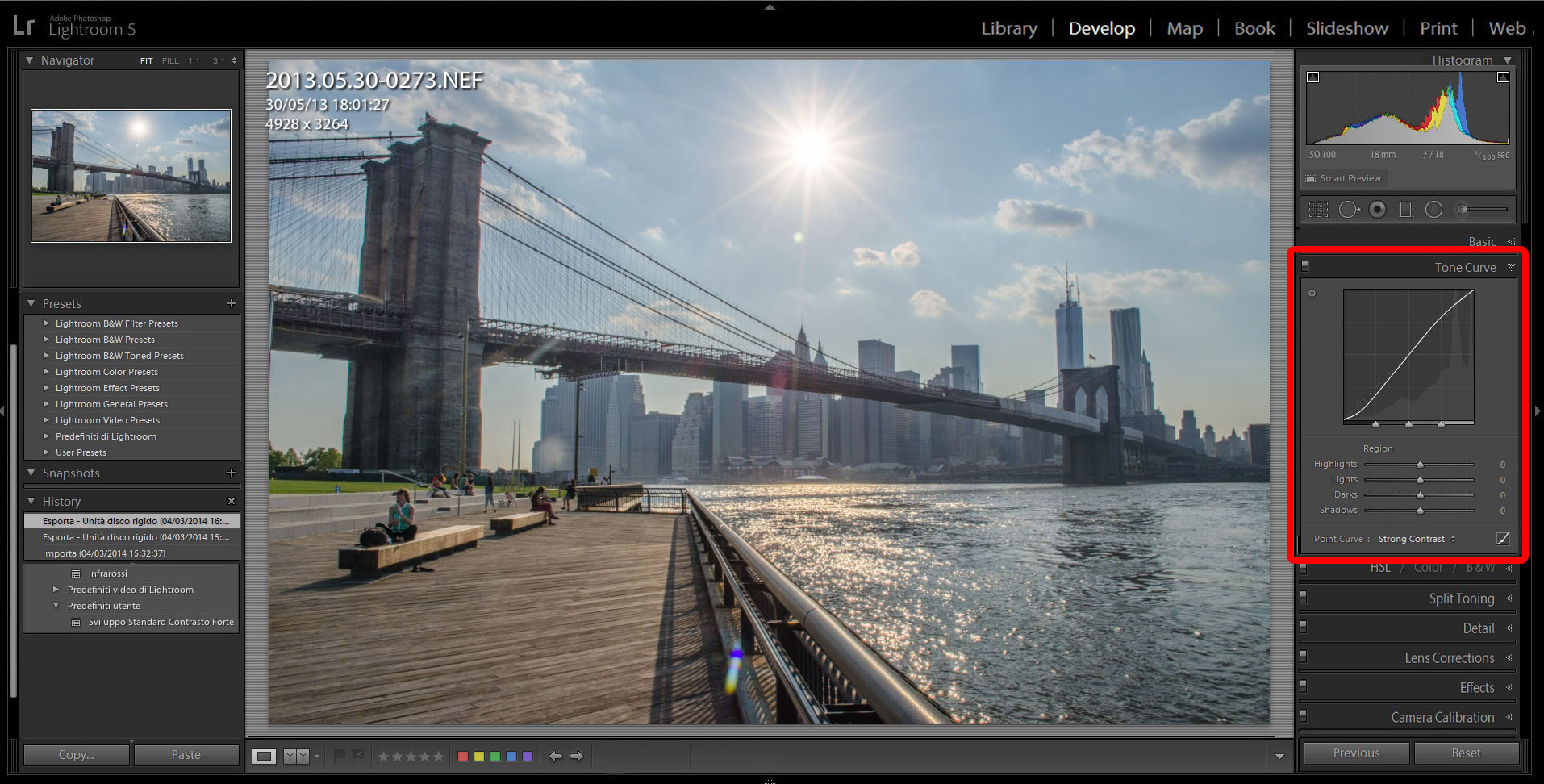 Moving on, let’s skip the panels “HSL / Color / B & W” and “Split Toning” which we don’t need in this case, but in other situations they could be very useful when working selectively on single colors, or when you need to get a particular look such as the sepia or the lomography effect. Let’s move to the “Detail” panel, which is in my opinion one of the most powerful and useful Lightroom tools, especially in the latest versions of the software. This panel allows you to work on sharpening and digital noise reduction. In this case we’re talking about “input sharpening“, a rather limited increase of the sharpness, but already able to make more defined contours and details of our image. Later on during this workflow we will see that there’s also an “output sharpening” to be applied before the final export from Photoshop, in the second part of the editing process. As for noise reduction, this is a very effective tool and in my opinion, even better than the corresponding filter in Photoshop. This is why I prefer to reduce digital noise in this first part of the editing process in Lightroom. 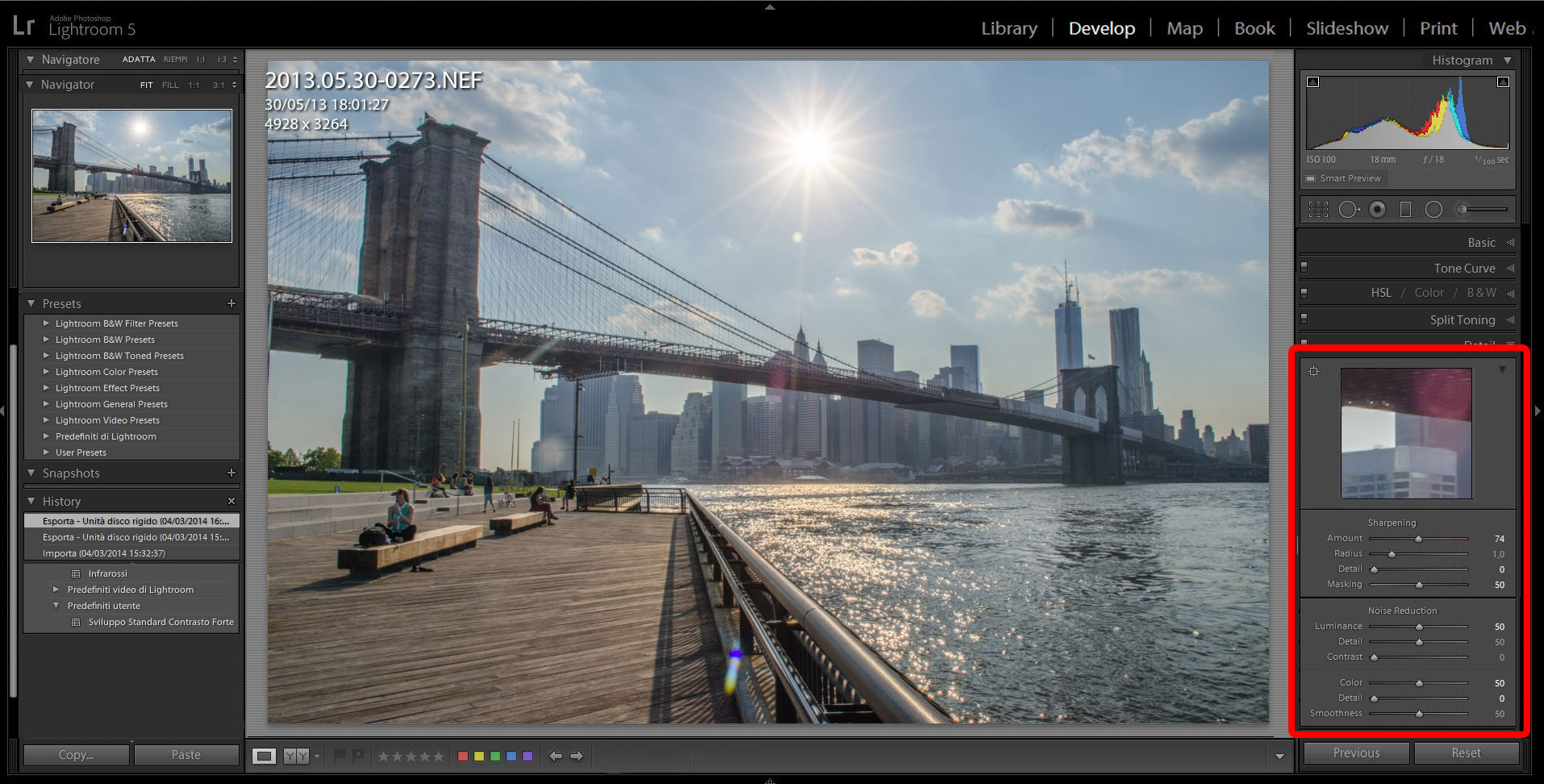 The last part of the adjustments has to be made in the “Lens Correction” panel, where you can correct all the flaws of the image due to the lens used to make the shot, whether that involves perspective deformation rather than the chromatic aberrations. In the “manual” sub panel for example you can “straighten” lines by acting on the vertical and horizontal slider, or you can align the horizon by rotating the image or even make other adjustments about distortion, scale and aspect. It is important to select the flag “Constrain Crop” to automatically exclude unnecessary areas that are created when you manipulate the image. In the example image of the Brooklyn Bridge, the adjustment of the vertical lines allowed me to straighten the pillars of the bridge which were originally slightly converging toward the center. 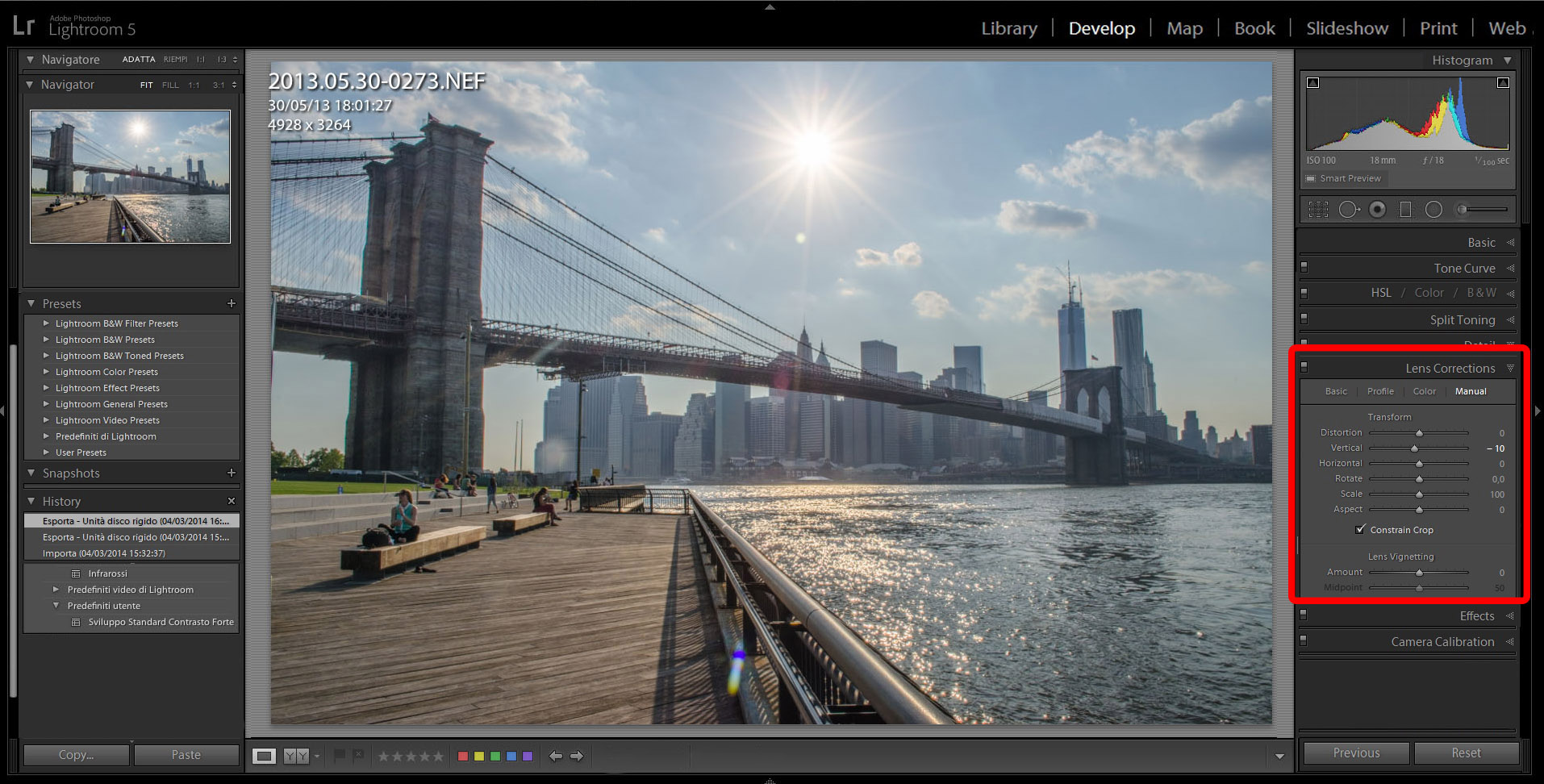 Selecting “Enabling profile corrections” in the “Profile” subpanel, the software will be able to correct many of the flaws of the lens used to make the shot (retrieved automatically from the file metadata) by drawing on the database of known lenses. You can also choose a different lens to achieve creative effects, although this is an option that so far I’ve never found particularly useful. 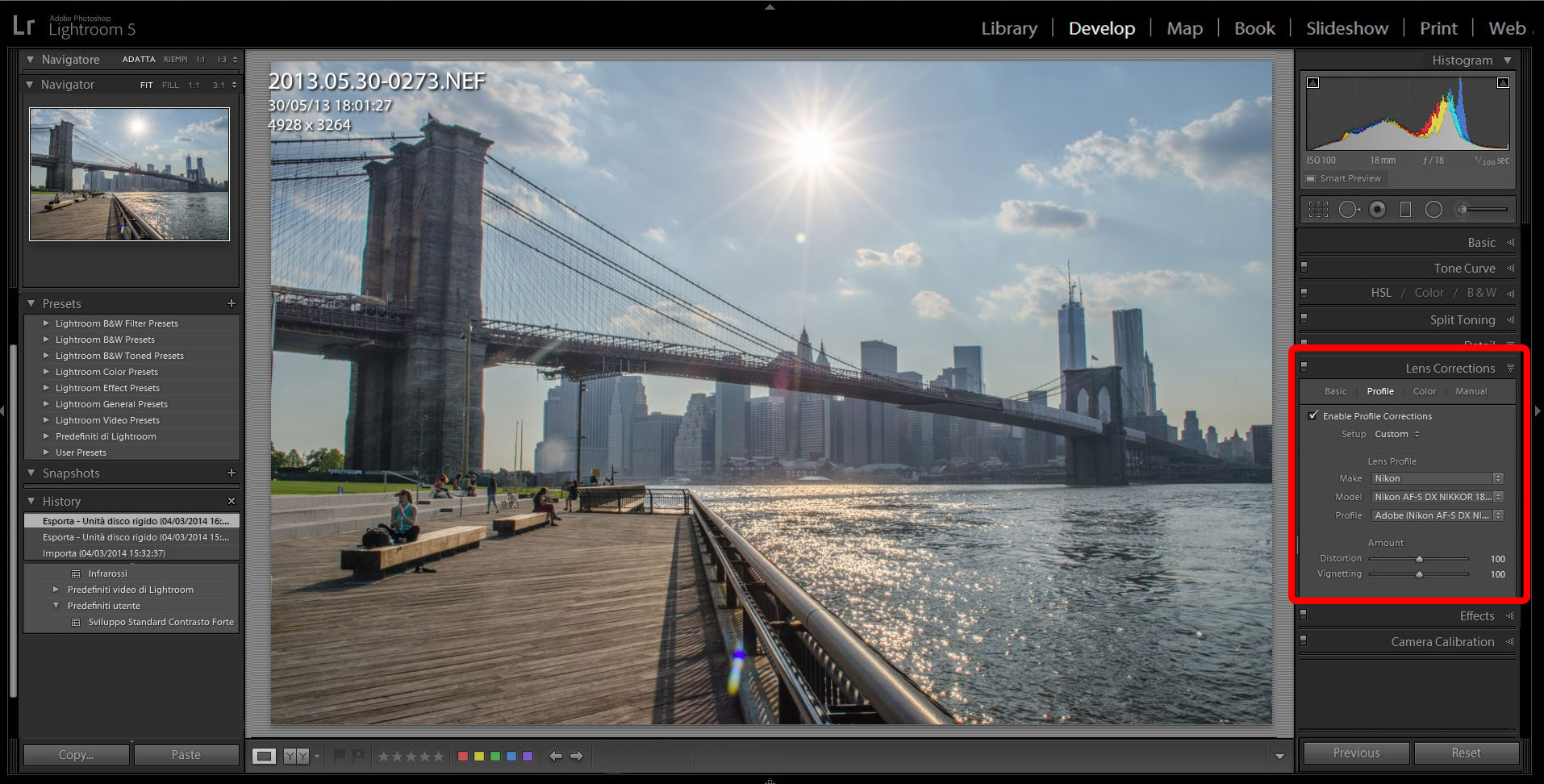 In the “Color” subpanel you can instead compensate for color aberrations, even selecting the type and the intensity of the correction. 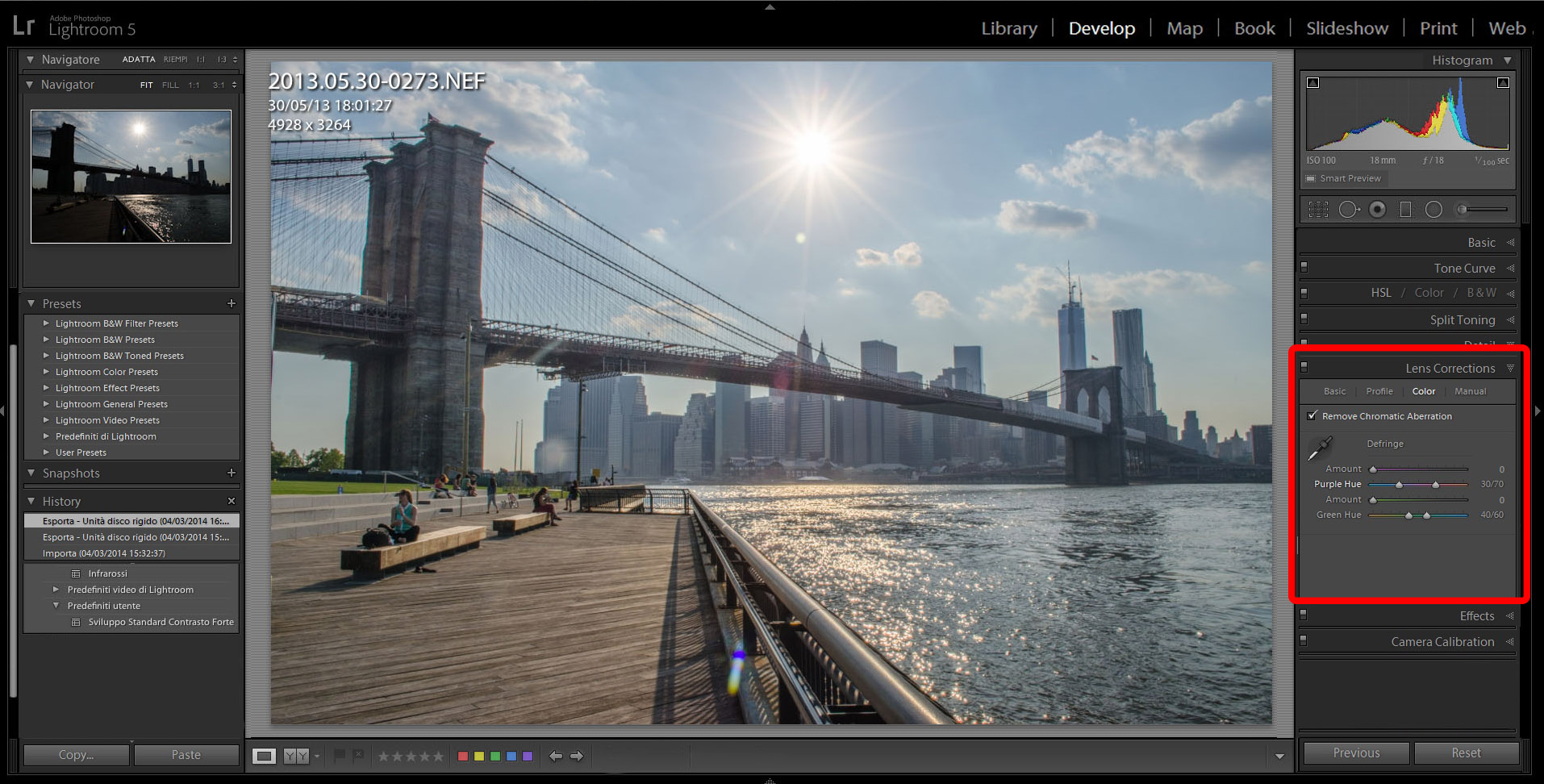 At this point, all the settings of the first part of the editing process are completed and saved to the “sidecar” file with .xmp extension, which accompanies the RAW file. If now you would mistakenly delete this sidecar file, all adjustments made this far would disappear and the RAW file would return to its original view, which is why it is said that Lightroom adjustments are “non-destructive” for the raw file. We can now switch back to the “library” module in Lightroom, where we will find our image with all the adjustments made. At this point I use to mark the picture with a yellow label, which reminds me that the editing process in Lightroom is finished and the image is ready for further processing and finalization in Photoshop. I also use to make my personal assessment to the file by setting the rating in stars, since already at this stage of development I am able to imagine the final result and the potential of the image. If I had made the assessment based on the initial RAW file with that heavy backlight, my rating in stars would have probably been much lower. 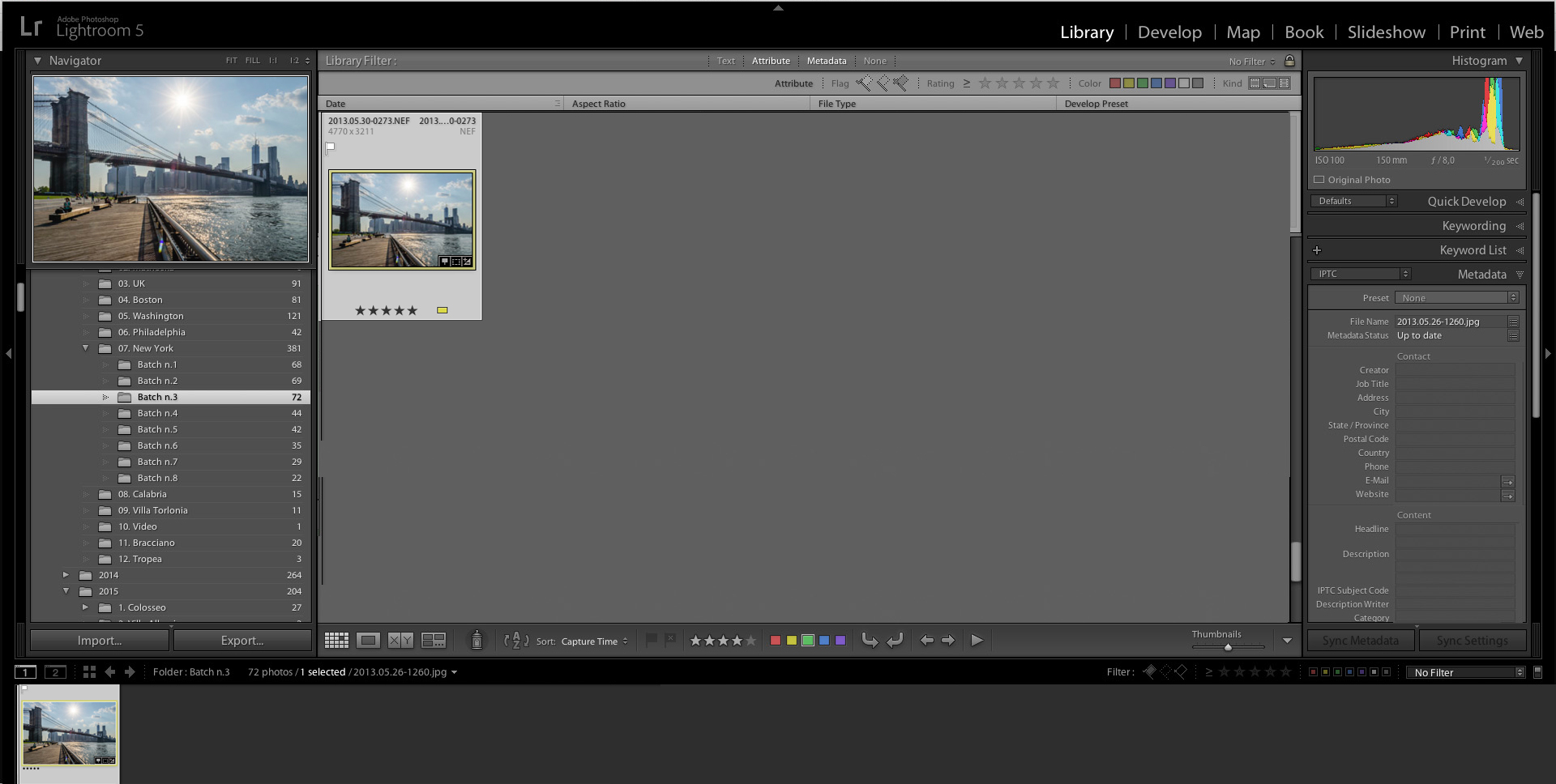 The first part of the editing process is completed and the image is now ready for further development with Photoshop and for the final exportation in JPG format.

Go to the next phase of the workflow:

Go back to the previous phase of the workflow: