The Great Beauty… in HDR

from the movie “The Great Beauty” (2013) by Paolo Sorrentino

After a few months during which my production of new images for the microstock had suffered a sharp slowdown, I finally found the time to edit some pictures that I took last March, after the planetary success at the Academy Awards of the movie “The Great Beauty” by Paolo Sorrentino. The purpose of this article isn’t in any way to make a review or to criticize the movie, but despite the idea that everyone of us can have about it, an undoubted merit of this film, moreover unanimously recognized, is that it has shown in a spectacular and involving way some of the most evocative places of Rome, from the most known (Colosseum, Janiculum, Piazza Navona, Via Veneto) to those a bit less known even by those who were born in Rome or who have lived there for all of their life.

In particular, one of the most ironic scenes of the movie – the one where an alleged avant-garde artist performs in a resounding head shot against the pillar of an ancient Roman aqueduct – is set in the Park of the Aqueducts, near the Appia Antica. It is a rather large public space, in which are still visible the remains of seven Roman aqueducts, and where people are used to walking, jogging and being outdoors in a seemingly indifference to the historical and archeological importance of this extraordinary place. Certainly, however, the movie by Sorrentino has given international fame to this park, which has already become a destination more frequently included in the touristical routes of people visiting the Capital.

And then on a Sunday afternoon I decided to take a walk as Jep Gambardella (the main movie character) bringing with me my backpack, my lenses, my filters and the indispensable tripod. The idea was to capture some striking images by taking advantage of the golden light of the late afternoon. Indeed the light was really remarkable but, depending on the vantage point, the exposure of some shots was made difficult by a strong backlight. In other words, I had 2 options: expose properly the ruins while having a completely overexposed sky (image 1); expose in order to have a sunset with more detail, while getting the ruins very dark and full of shadows (image 2). 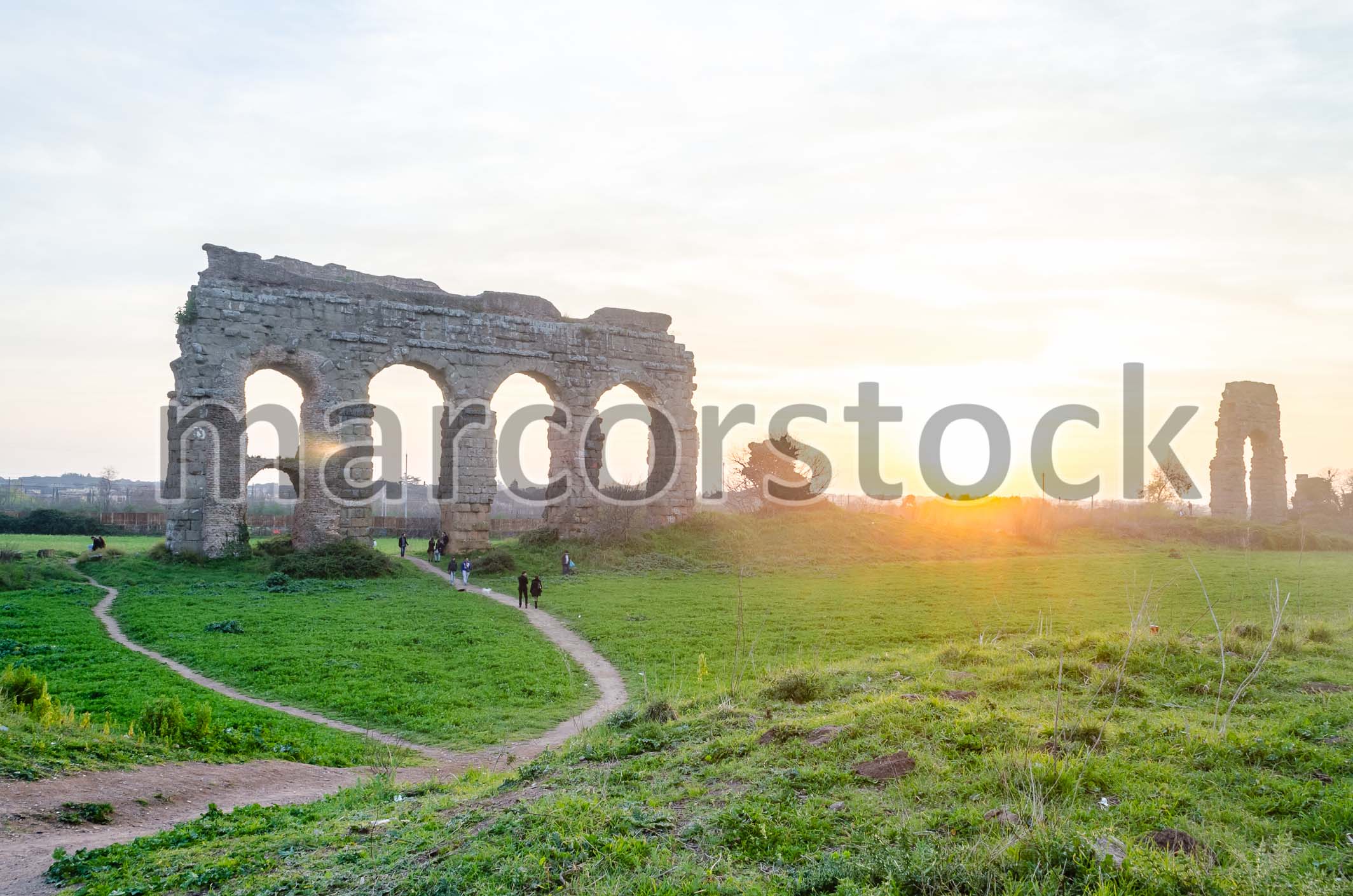 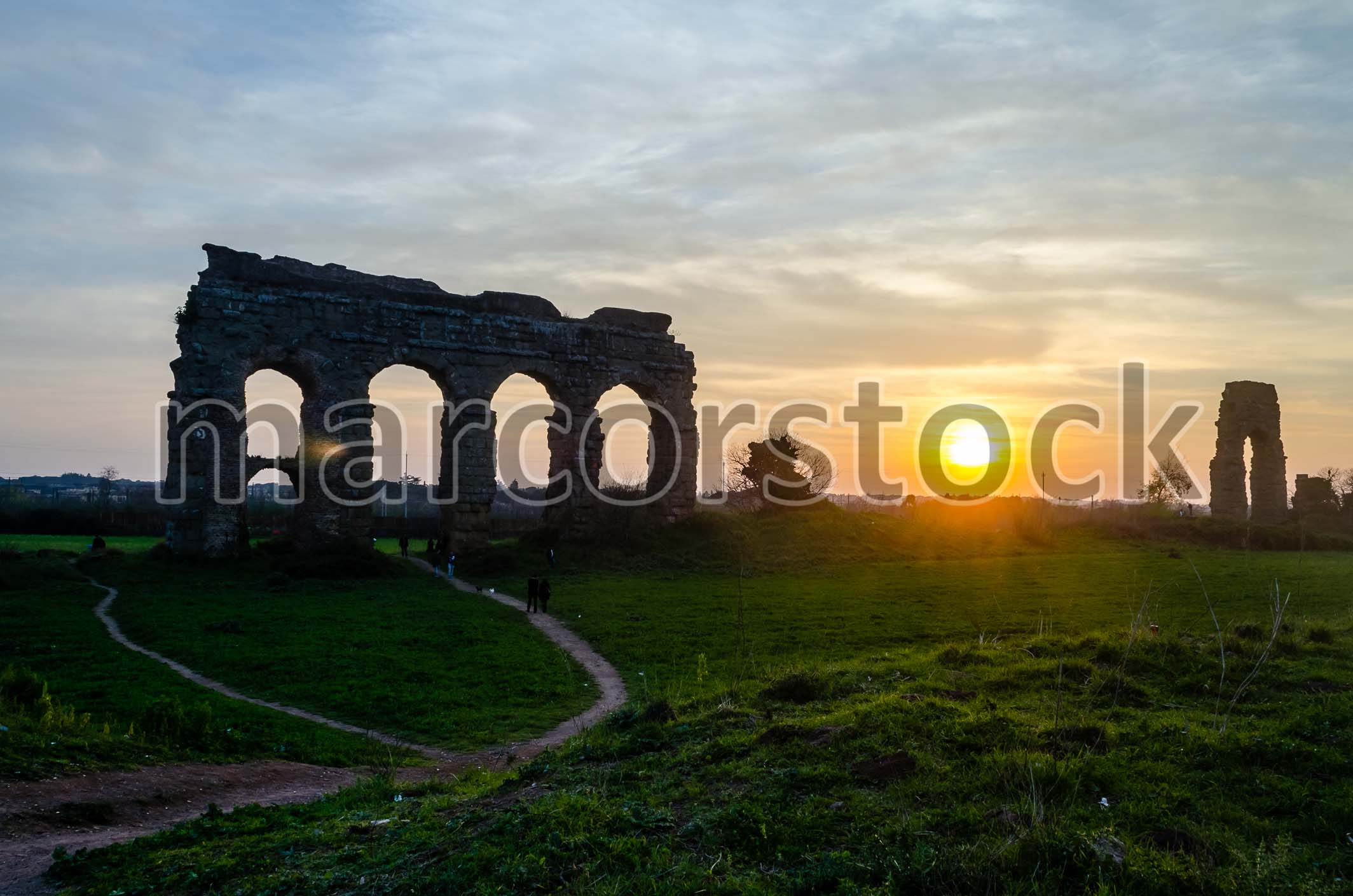 The only solution was to use the bracketing, then combining pictures in post-production to get a HDR image (High Dynamic Range) correctly exposed in all areas of the frame. This was the set used: Nikon D5100, 18-55mm lens with polarizing filter and lens hood, tripod, remote shooting and bracketing function with three different exposures (-1, 0, and +1 EV). Back home, I put together the sets of three shots in Photoshop using the plugin HDR Efex Pro by Nik Collection, trying to avoid oversaturated colors in order to achieve an effect as realistic as possible. Below the result at the end of post-production. 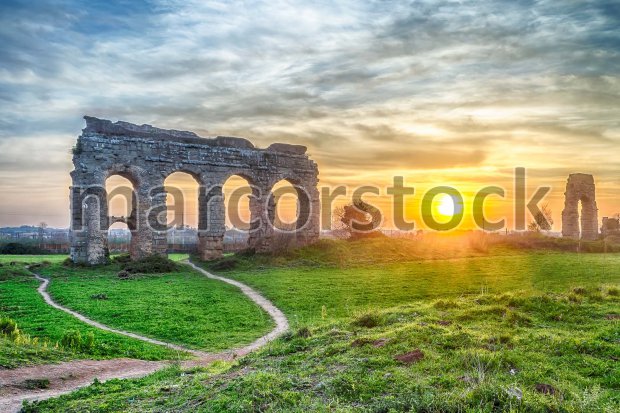 HDR image created from the union of 3 shots in bracketing

Incouraged by the result, I took 14 good pictures, from which I also produced 9 Alternate versions in black and white or sepia, for a total of 23 pictures ready to be indexed and sent to the microstock agencies.

After submitting the same images to all the agencies to which I contribute regularly and after waiting patiently for the reviewers to do their work, here are the results about the approval by the top 10 agencies, some of them quite surprising:

Here are some of the images for sale online, taken from this photowalk.

This pleasant walk among the Roman aqueducts gave me several dozens of images approved, which increase my online portfolio significantly if compared to the previous month. Moreover, since the early days, 2 or 3 pictures have begun to sell well both on Shutterstock and on Fotolia, presaging good results expected for the next few weeks. So thanks to “The Great Beauty“, which gave me an opportunity to spend a day in a very special place of Rome, besides giving me the inspiration for new works which increased my personal portfolio. And, who knows, I may think of doing some other stroll in the other locations of the movie in the near future… Map of the Photowalk at the Park of the Aqueducts (Rome)